Co-sponsored by the Wolf Humanities Center 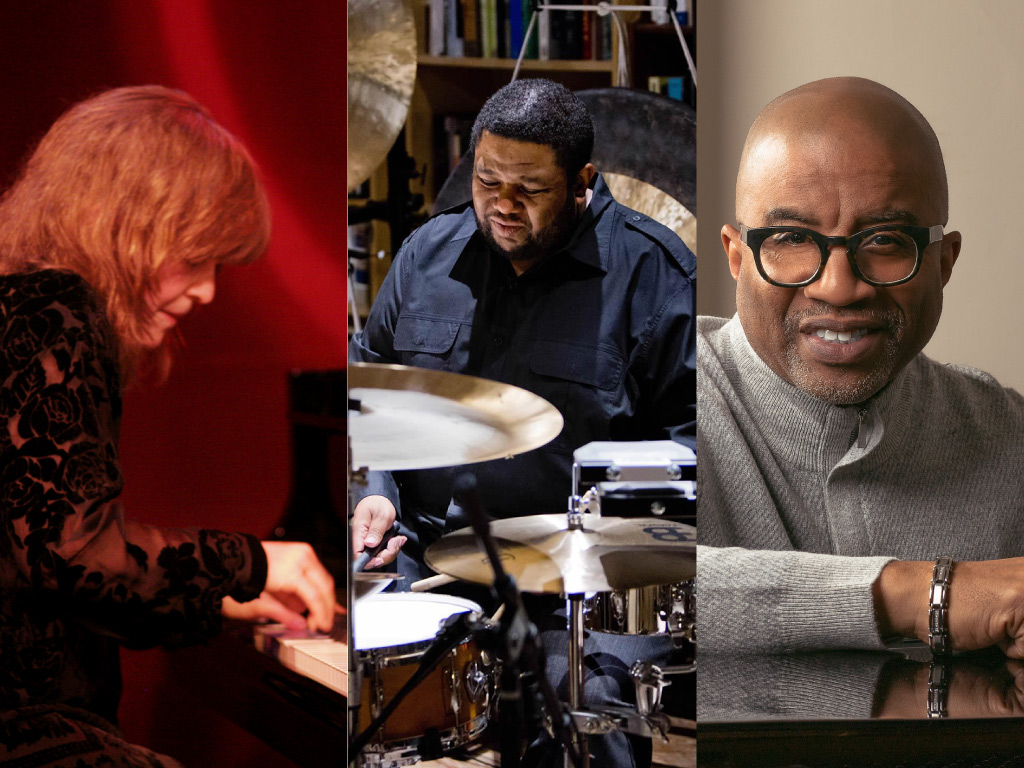 Celebrate choice with an improvisational jazz performance by percussionist Tyshawn Sorey and pianist Marilyn Crispell in this year's esteemed Dr. S.T. Distinguished Lecture in the Humanities! After the performance, Penn Music's Guthrie Ramsey joins Sorey and Crispell for a wide-ranging discussion about the choices they make in improvisation and spontaneous composition, historical perspectives on improvisation, and their acclaimed 2019 release The Adornment of Time. Cosponsored by the Departments of Africana Studies and Music, the Center for Africana Studies, and the Department of Music.

Tyshawn Sorey, Newark-born multi-instrumentalist and composer, is celebrated for his incomparable virtuosity, effortless mastery and memorization of highly complex scores, and an extraordinary ability to blend composition and improvisation in his work. He has performed nationally and internationally with his own ensembles, as well as artists such as John Zorn, Vijay Iyer, Roscoe Mitchell, Muhal Richard Abrams, Wadada Leo Smith, Marilyn Crispell, George Lewis, Claire Chase, Steve Lehman, Jason Moran, Evan Parker, Anthony Braxton, and Myra Melford, among many others. The New York Times has praised Sorey for his instrumental facility and aplomb, “he plays not only with gale-force physicality, but also a sense of scale and equipoise”; The Wall Street Journal notes Sorey is, “a composer of radical and seemingly boundless ideas.” The New Yorker recently noted that Sorey is “among the most formidable denizens of the in-between zone…An extraordinary talent who can see across the entire musical landscape.”

Sorey has composed works for the Los Angeles Philharmonic, the International Contemporary Ensemble, soprano Julia Bullock, PRISM Quartet, JACK Quartet, TAK Ensemble, the McGill-McHale Trio, bass-baritone Davóne Tines, Alarm Will Sound, the Louisville Orchestra, and tenor Lawrence Brownlee with Opera Philadelphia in partnership with Carnegie Hall, as well as for countless collaborative performers. His music has been performed in notable venues such as the Walt Disney Concert Hall, the John F. Kennedy Center for the Performing Arts, the Village Vanguard, the Ojai Music Festival, the Newport Jazz Festival, the Kimmel Center, and the Mostly Mozart Festival at Lincoln Center. Sorey has received support for his creative projects from The Jerome Foundation, The Shifting Foundation, Van Lier Fellowship, and was named a 2017 MacArthur fellow and a 2018 United States Artists Fellow.

Sorey has released twelve critically acclaimed recordings that feature his work as a composer, co-composer, improviser, multi-instrumentalist, and conceptualist. His latest release, Pillars (Firehouse 12 Records, 2018), has been praised by Rolling Stone as “an immersive soundworld… sprawling, mysterious… thrilling” and has been named as one of BBC Radio 3’s Late Junction 2018 albums of the year.

Marilyn Crispell has been a composer and performer of contemporary improvised music since 1978. For ten years, she was a member of the Anthony Braxton Quartet and the Reggie Workman Ensemble, and she has performed and recorded extensively as a soloist and with players on the American and international jazz scene, also working with dancers, poets, film-makers and visual artists, and teaching workshops in improvisation. She has been the recipient of three New York Foundation for the Arts Fellowship grants, a Guggenheim Fellowship, and a Mary Flagler Cary Charitable Trust composition commission.

A member of the American Academy of Arts and Sciences, Guthrie P. Ramsey, Jr. is a music historian, pianist, composer, and the Edmund J. and Louise W. Kahn Term Professor of Music at the University of Pennsylvania. A widely-published writer, he’s the author of Race Music: Black Cultures from Bebop to Hip-Hop (2003), and The Amazing Bud Powell: Black Genius, Jazz History and The Challenge of Bebop (2013). Dr. Ramsey is co-author beside Samuel A. Floyd, Jr., with Melanie Zeck of The Transformation of Black Music: The Rhythms, the Songs and the Ships of the African Diaspora (2017) and editor of Rae Linda Brown, The Heart of a Woman: The Life and Music of Florence B. Price (2020). His books in progress include Who Hears Here?, a collection of essays, and the monograph Sound Proof: Black Music, Magic and Racial Intimacies, a history of African American music from the slave-era to the present. He was editor for the series Music of the African Diaspora at the University of California Press for ten years and founding editor of the blog Musiqology.com.

As a producer, label head, and leader of the band Dr. Guy’s Musiqology, Dr. Ramsey has released five recording projects and has performed at venues such as The Blue Note and Harlem Stage in New York, and the Annenberg Theater of the Performing Arts and Chris’ Jazz Café in Philadelphia, and other venues worldwide.  His musical commissions include “Someone Is Listening,” written with poet Elizabeth Alexander, commemorating the 100th anniversary of the NAACP; he recently scored the prize-winning documentary Making Sweet Tea: Black Gay Men of the South. His documentary Amazing: The Tests and Triumph of Bud Powell was a selection of the BlackStar Film Festival in 2015 and his multimedia performance piece Hide/Melt/Ghost made its New York debut at Harlem Stage in 2019. Ramsey hosts the Musiqology Podcast and Musiqology Rx is his community arts initiative that provides quality arts programming to under-served communities. He has written for and consulted with museums and galleries such as The Studio Museum in Harlem, The Whitney Museum of American Art, The Museum of Modern Art, and the Nationalgalerie, Staatliche Museen zu Berlin, and was co-curator of the acclaimed exhibition Ain’t Nothing Like the Real Thing: How the Apollo Theater Shaped American Entertainment for the National Museum of African American History and Culture in 2010. Dr. Ramsey has lectured on music nationally and internationally.

This program has been rescheduled from our 2020–2021 Forum on Choice (original date March 24, 2021).
Free and open to the public.
Registration requested (coming soon).
Registration does not guarantee a seat. Guests are encouraged to register and arrive early. Doors open at 4:30 and seating is on a first-come, first-served basis with priority for those who pre-registered.