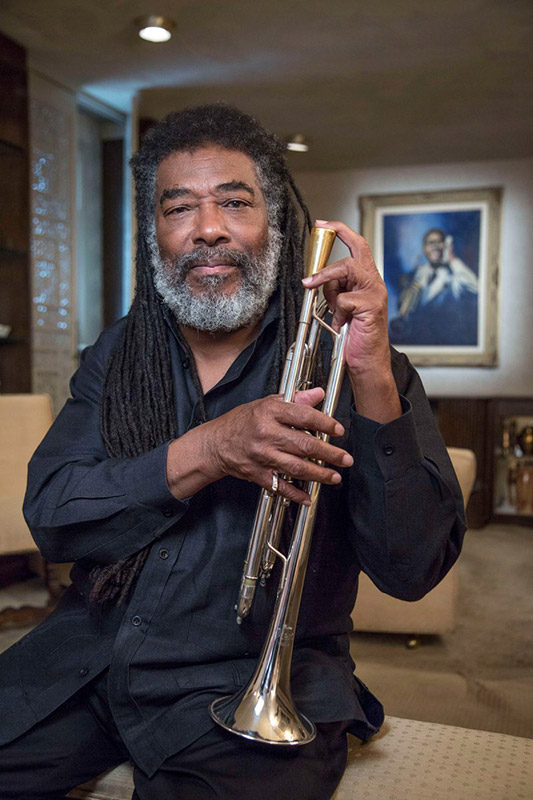 Wadada Leo Smith will play excerpts and exhibit sections from scores that illustrate what the  “sonic-field” looks and sounds like. This information will demonstrate the why and what conditioned him to focus on composing string quartets for over fifty years. A vital part of Smith's presentation will be realized in the present moment, created with those who are in attendance. For all who plan on participating in this presentation, we ask that you read his CREATE document to connect with some of the ideas, language and definitions Wadada uses when referencing his work. Please see below for a link to download the PDF file.

Smith defines his music as “Creative Music,” and his diverse discography reveals a recorded history of music centered in the idea of spiritual harmony and the unification of social and cultural issues of his world. He has developed his own musical language called Ankhrasmation which uses image-based scores to guide the musicians. He started his research and designs in search of Ankhrasmation in 1965, and his first realization of this language was in 1967, when it was illustrated in the recording of The Bell (Anthony Braxton: ‘Three Compositions of New Jazz’).  Ankhrasmation has played a significant role in Wadada’s development as an artist, ensemble leader and educator. Smith’s Ankhrasmation language scores have been exhibited in major American museums including The Renaissance Society at The University of Chicago, which in October 2015 presented the first comprehensive exhibition of these language scores. In 2016, the Hammer Museum’s ‘Made in L.A.’ exhibition featured the scores and presented Smith with the Mohn Award for Career Achievement honoring “brilliance and resilience.” His scores have also been shown at the Kalamazoo Institute of Arts, Michigan, and the Kadist Art Foundation in San Francisco, California, and at the Vision Festival in NYC.

This event is free and open to the public. If you attend in person, there is no need to register. We ask that you join us in person if at all possible, but for those of you who are unable to physically attend we encourage you to participate via Zoom. Registration link to attend virtually is below:

NOTE: After registering, you will receive a confirmation email containing information about joining the meeting.

This lecture is part of the 2022-23 Penn Music Colloquium Series. The Department of Music's main Colloquium Series showcases new research by leading scholars in music and sound studies and composers both in the United States and internationally.  All Music Colloquia will take place in Room 101 of the Lerner Center on Tuesdays at 5:15 PM.