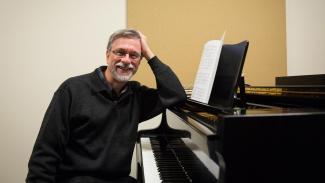 The Department of Music mourns the loss of our colleague Jim Primosch, who passed away on Monday, April 26, 2021 at the age of 64. He was a composer and pianist and the Robert Weiss Professor of Music at the University of Pennsylvania. Jim joined the faculty in 1988 and enjoyed a distinguished career in which he firmly established himself as a major figure in the arts community here in Philadelphia while also rising to national and international prominence. Indeed, his work was regularly performed by a host of prominent orchestras, ensembles, and artists, including by the Chicago Symphony Orchestra, Speculum Musicae, and the Prism Saxophone Quartet, to name only a few. His distinctive gift for vocal music led him to work with many eminent singers, including Lucy Shelton, Dawn Upshaw, Susan Narucki, Mary MacKenzie, Kiera Duffy, Tony Arnold, and Brian Mulligan.

One of the hallmarks of Jim’s musical life was his commitment to making his music accessible to musicians and ensembles of varying skill levels. He wrote music that was aimed at professional orchestras but also crafted music suitable for his local parish choir. He reveled in writing for world class ensembles such as the New York New Music Ensemble or The Crossing (with whom he collaborated on a Grammy-nominated recording of his choral music), and enthusiastically engaged with amateur ensembles like the Settlement Music School Contemporary Players. And, perhaps most tellingly, he never stopped pursuing excellence, which for him meant a journey without an arrival—an aspiration, and a life’s work.

Within the Department of Music, Jim could be found practicing piano early in the morning; or engaged in an impromptu discussion with a colleague about a jazz tune; or working with his students in studio lessons or seminars; or planning a concert with one of our ensemble directors; or catching up with a staff member. Jim also served the department by taking on official administrative roles, serving as department chair and undergraduate chair on several occasions. In all of these roles—whether as an administrator, colleague, or mentor—Jim’s wry sense of humor, his commitment to excellence, and his humanity shone through brightly.

Jim maintained a lifelong friendship with the composer John Harbison, who he first met as a student at Tanglewood in 1984 and who describes Jim’s music as follows: “His work was never decorous or reverential—it was always a vigorous, contemporary unapologetic assertion of his heartfelt convictions.” Jim’s impact on his students, colleagues, collaborators, and friends is impossible to overstate and we will miss him dearly.

He is survived by his wife, Mary Murphy, their two children, Thomas and Mary Rose, and three siblings. Donations in his name may be made to Face to Face, the social services group in Germantown, facetofacegermantown.org

Photo by Scott Spitzer for Omnia.