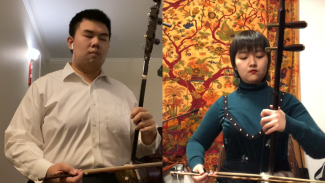 Check out these Erhu duets played by Allan Lee and Qixuan Liu, members of the Penn “Flow” Chinese-Western Music Ensemble. In this video, sophomore Allan Lee, an economics major in the College of Arts & Science from Vancouver, Canada, virtually collaborates with Qixuan Liu, a second-year intercultural communication major in the Graduate School of Education from Tianjin, China. Both Allan and Qixuan have been playing the erhu (二胡), a two-stringed Chinese fiddle, for years and have been performing in various settings ranging from public concerts to private lectures. The first piece, “Galloping Steeds (战马奔腾),” a composition that is well known for technical challenge, conveys an uplifting spirit of warring horses galloping across the national border. The second piece, “ A Beautiful Night (良宵)” was originally composed for an erhu solo by the Chinese composer Liu Tianhua (刘天华) during Chinese New Year’s Eve in 1928. This piece expresses the composer’s well wishes for life and artistry in the upcoming new year.