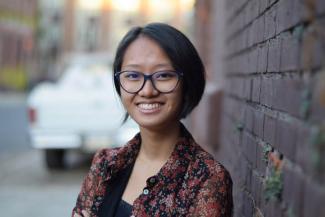 Fourth Year Graduate Student in Composition, Ania Vu will perform in the Digital Concert series presented by Illuminate Women's Music, a project to promote the work of emerging women composers and performers.

Piano Variations (2012)
My first piano piece that was inspired by various Vietnamese folk tunes. Through this piece, I explored working at the intersection of pentatonic, tonal, and atonal idioms.

Dark Whims (2013, rev. 2016)
​This piece’s structure is based on sharp contrasts between the very harsh, and the very lyrical. The two fight against each other and develop in unexpected ways, and none of them become truly settled at any point in the piece.
As a pianist, I was interested in the extent of control the pianist has over connecting notes through resonance on a percussive instrument.
The piece is a study of how different resonances (shaped by the attack, decay, sustain, release through various articulation and dynamics) can form phrases and different musical characters.

Against Time (2018)
Against Time is about my experience of feeling time being suspended and ceasing to exist. This experience was prompted by a rather difficult time period of my life that made me feel time in a way I had never experienced before.
Since then, as a composer I have been interested in this idea of time awareness in music. In this piece, there is a prominent note repetition that symbolizes two paradoxical ideas of time: time suspension because repetition suggests stability, but also its flow, because on a percussive instrument like the piano, one has to keep pressing the key to make sounds. Once in a while, sudden bell sounds emerge, and overtime, after the very slow and quiet music, all the energy that went into keeping time from running, eventually shatters.