The renovation and expansion of the University of Pennsylvania Music Building consolidates distributed academic resources; revitalizes a prominent 19th century landmark; provides new community spaces for faculty and students, and serves as a model for the compatibility of historic and contemporary design expression.  As the campus’ first LEED Gold building, the project demonstrates that preservation, new design, and program can together produce a sustainable result.  Designed by Boston-based Ann Beha Architects, this project has been honored with design awards from the Society for College and University Planning, the Boston Society of Architects, the Preservation Alliance for Greater Philadelphia, and Preservation Pennsylvania. 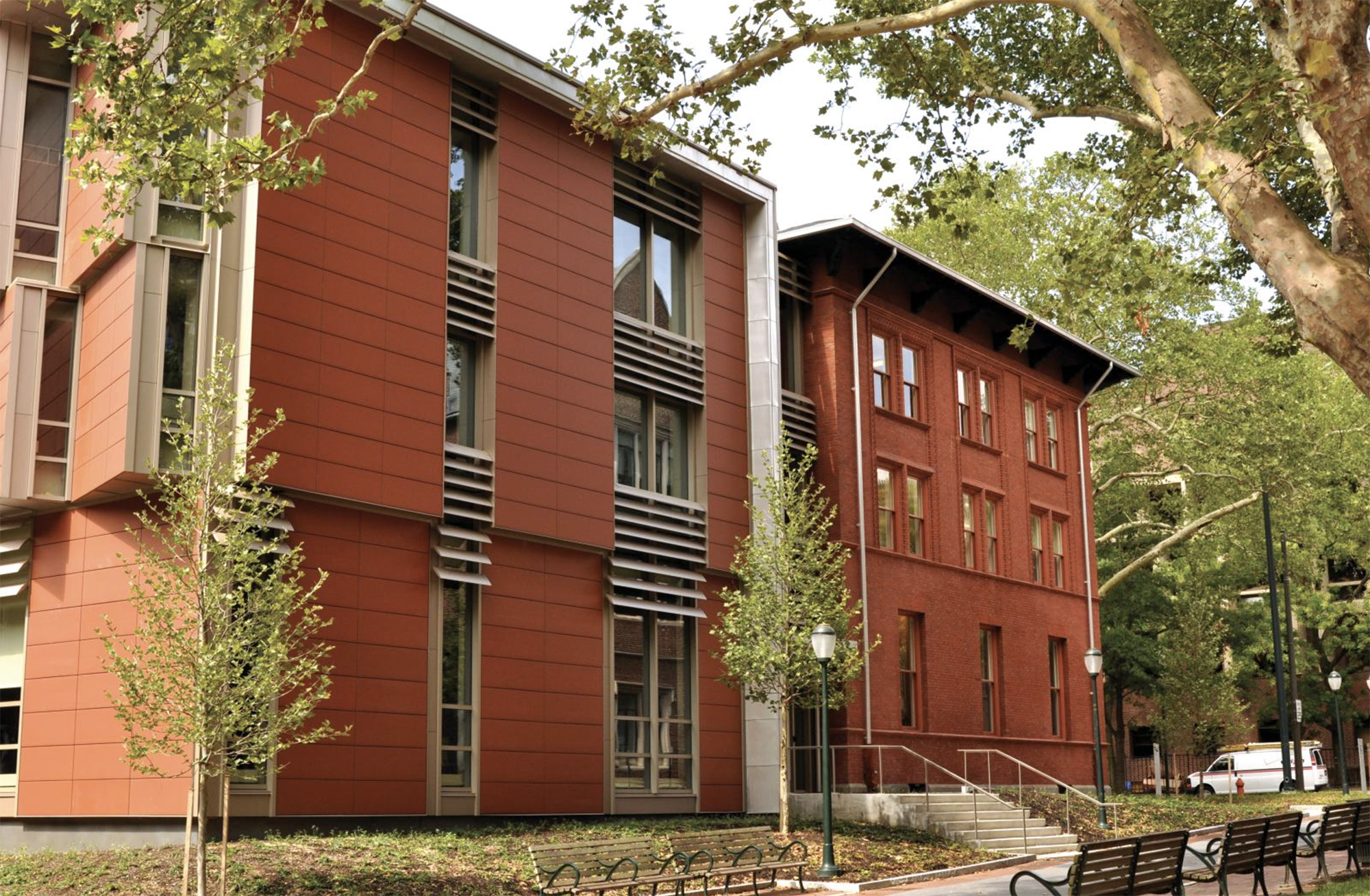 The Music Building is located in the heart of the University’s historic campus core, and is listed on the Philadelphia Register of Historic Places.  In 1892, Architects Cope & Stewardson designed the Music Building and neighboring Morgan Building as a dormitory and school for a girl’s orphanage.   Later converted into University physics labs, the building was extended with a series of small additions, congesting the site on busy campus paths. It became home to the Department of Music in 1968.

Acoustic performance was paramount to the building occupants. The Department’s most acoustically and technologically demanding functions— classrooms, practice rooms, recording studios, a computer teaching lab, and composition offices — are located in the addition, which offers high levels of isolation and in-room acoustics. The acoustics and audio/visual systems in the large classroom are designed to accommodate multiple functions, including instruction, performance, recording, and events. The former basement practice rooms were relocated to spaces with ample daylight, and common spaces for faculty and students on each floor acknowledge that collaboration and interaction among colleagues is a critical component to creative success.

Extensive acoustic and technological renovations in the existing building meet the practical demands of instruction and research while preserving its historic character — such as vibration isolation in wall, floor, and ceiling construction, and new interior glazing that resolves exterior noise infiltration while preserving the appearance of the original wood windows.  By renewing the existing building and improving its acoustic performance, and by providing new teaching, composing, and rehearsal spaces in new construction, this project provides the Department with a complete and integrated setting for events and faculty, students and staff use.

A Dialogue Between Historic and Contemporary Design

This project began with a thorough investigation of the landmark building, its history, original design, and context. The restoration included rebuilding original windows; cleaning and repairing decorative brick, terra cotta and bluestone masonry; and restoring ornamental wood roof brackets and overhangs. The interior was renovated and upgraded structurally, mechanically, and acoustically to accommodate administrative and faculty offices. The original façade design was studied intently to create a design approach for the addition. Because the University and Design Team wanted a building where music was not only heard, but also seen, the addition is deliberately more transparent and welcoming, with views into the building from three pedestrian passages and multiple entries into a central gathering space. The addition is sympathetic to the existing building in its massing, materiality, and rhythm. It introduces a similarly colored terra cotta as a larger scaled rain screen system, generous expanses of glass with sun shades, and a metal cornice aligning with the broad roof overhang of the original structure; but its lightness and transparency contrast the solidity of the original building and openly display music activities to the University community. On each interior level, open circulation incorporates the restored east façade, and commons and lounges offer social spaces with views to the campus.

The renovated and expanded Music Building is set in both small and large landscaped spaces. A reclaimed campus green, framed by the Music and Morgan Buildings, sets the stage for outdoor performance and gathering. By re-opening the original path between the Music and Morgan Buildings, new pedestrian passages are connected to the historic campus core. Adjacent to the addition, a terrace and fountain extend the campus tradition of intimately scaled transitional spaces between buildings and larger campus spaces.

In keeping with the University’s adopted Climate Action Plan, this project integrates multiple sustainable elements. The project exceeds energy standards with its use of efficient lighting and controls, mechanical, and plumbing systems. Other sustainable features include reduced site water use with planting material selection and “smart” controls that adjust irrigation based on rainfall levels; recycling or salvaging 95% of construction waste; use of recycled, reclaimed, and regionally produced materials; and sustainable housekeeping methods and cleaning products.

Open and occupied since January 2010, the Music Building has become a hub for performance, practice, and social activities. It consolidates a diverse population, presents opportunities for all to become involved in the Department, integrates faculty with students on a daily basis, and provides an acoustical setting where performers and urban and campus activities can comfortably co-exist. The University lauds it as a livable, sustainable prototype for the redeployment of its existing buildings, and for its understated approach to creating a community within a campus.