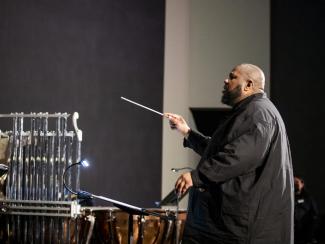 “[Tyshawn Sorey] was the composer of the year…an artist at the nexus of the music industry’s artistic and social concerns.”
—The New York Times

Fifty years ago, composer Morton Feldman wrote music to commemorate the opening of the Rothko Chapel in Houston. A half-century later, composer, conductor, multi-instrumentalist and MacArthur “Genius” Tyshawn Sorey has created a new piece, commissioned by the Armory, as a tribute to both the deeply contemplative space and the work by this composer that has influenced his creative output. The resulting score provides the listener with the feeling of being enveloped in sound in much the same way that Mark Rothko’s paintings give in that space, revealing ever changing shades of color and texture.

Visionary director Peter Sellars returns to the Armory following his unforgettable stagings of St. Matthew Passion (2014) and FLEXN (2015, 2017) to ritualize this deeply moving work. Within the confines of a ceremonial chamber, audiences are immersed in Sorey’s composition, works by celebrated visual artist Julie Mehretu, and choreography by flex pioneer Reggie (Regg Roc) Gray to gain new perspectives on time, space, and movement. And while profoundly personal, this spiritual happening also serves as an invocation of the collective memory and ancestral trauma of our time and the distant but resonant past.

IMAGE: Composer, conductor and multi-instrumentalist Tyshawn Sorey leads a rehearsal of his Monochromatic Light (Afterlife) at the Rothko Chapel in Houston on Feb. 18. Scott Dalton/DACAMERA