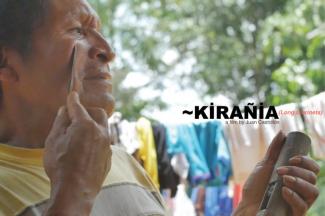 Juan Castrillón, Sixth Year Graduate Student in Ethnomusicology has several films which are very successful! Look below to see when and where you can view his work!

Official Selection of the short film KOSKETUS (sense of touch) at the Esoteric Film Festival of Moscow, February 16-21, 20201.
KOSKETUS is a journey of a painted touch into the world, accompanied by a prayer sonically hidden in a well at Jerusalem. The short film co-authored by Juan Ibrahim and Vilja Urda Augusta, a Finnish contemporary artist. Esoteric Film Festival - KOSKETUS trailer

Documentary Filmmaker Discussion of ~KİRAİÑİA (Long Flutes) organized by the Center for Research and Collaboration in the Indigenous Americas (CRACIA) of the University of Maryland, March 5, 2021. Juan Castrillón will join CRACIA Co-Director Janet Chernela and Cubeo-Hehenewa anthropologist Orlando Rodriguez, in conversation about the film.  CRACIA online

Multimodal presentation at the Film Festival Conference of the Royal Anthropological Institute, March 19-28.
"Asynchronous Crisis, Corresponded Transcontinental Audio-visual Chronotope" is an ongoing collaboration with a Japanese visual anthropologist Pero Fukuda. Our work questions and multiplies the notion of crisis, and constructs a polyphonic transcontinental audio-visual chronotope by letting Fukuda and Juan Castrillón's fieldwork footages=experiences correspond, mirror, follow, askew and shadow each other. The presentation will be presented at the panel titled Chronotopes during crisis: a sound-image-letter correspondence. INFO HERE.