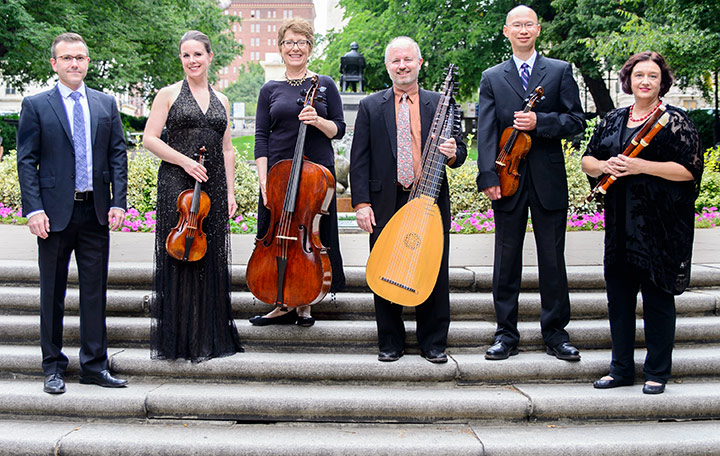 The University of Pennsylvania's Department of Music and the Kislak Center for Special Collections, Rare Books and Manuscripts are proud to present our third jointly sponsored music series Music in the Pavilion. Taking place in the beautiful sixth-floor Class of 1978 Orrery Pavilion in Van Pelt Library, the series showcases an array of professional and international musicians, not only performing gems from standard concert repertoires but also premiering works found only in the wealth of materials—print and manuscript—held in the Kislak Center's collections. Enriching the experience of each concert, attendees will have the opportunity to hear brief lectures by eminent scholars and graduate students that will contextualize the music historically, socially, and culturally.

[No pre-concert talk is scheduled for this concert]

A Tale of Two Italian Cities

chamber music from Venice and Naples

Francesco Mancini, Concerto in A minor (Naples, by 1725)

Fanfare magazine recently hailed Tempesta di Mare for its “abundant energy, immaculate ensemble, and undeniable sense of purpose.” Led by directors Gwyn Roberts and Richard Stone with concertmaster Emlyn Ngai, Tempesta performs baroque music on baroque instruments with a repertoire that ranges from staged opera to chamber music. The group performs all orchestral repertoire without a conductor, as was the practice when this music was new.

Tempesta’s Philadelphia Concert Series, noted by the Philadelphia Inquirer for its “off-the-grid chic factor,” emphasizes creating a sense of discovery for artists and audience alike. Launched in 2002, the series has included over 35 modern “world premieres” of lost or forgotten baroque masterpieces, leading the Inquirer to describe it as “an old-music group that acts like a new-music group, by pushing the cutting edge back rather than forward.” Its supporters include the Pew Charitable Trusts, the William Penn Foundation, the Presser Foundation and the National Endowment for the Arts.

National broadcasts of live performances include SymphonyCast, Performance Today, Sunday Baroque and Harmonia. Live concert recordings are distributed worldwide via the European Broadcasting Union, a global alliance of public service media organizations, with members in 56 countries in Europe and beyond.