Open to all students in the Penn community as well as to members of the greater Philadelphia community, this ensemble explores a wide range of Arab music and provides students with the opportunity to learn through coachings provided by several professional performers of Arab music. The Arab Music Ensemble participates in performances hosted and organized by PennMusic and members will also have the opportunity to perform at functions and events around Penn’s campus.

Philadelphia based Arab music specialist Hanna Khuri is a violin virtuoso trained in the western and the Arab music idioms. During his tenure with Al-Bustan Seeds of Culture, Khuri led the longest standing Arab music concert series in the U.S. featuring some of the most renowned singers/performers from the Arab world in partnership with local choirs, and a takht ensemble. Additionally, Khuri toured with Algerian Rai singer Cheb Khaled, Lebanese superstar Fairuz, and played lead violin with Iraqi singer Kazem Al-Saher, Grammy winner Youssou N'Dour and American Actor, Singer and activist Mandy Patinkin. In addition, Khuri can be heard on several pop recordings including Grammy-nominated song "Beautiful Liar" (featuring Beyonce and Shakira), and "Love and Compassion" (featuring Paula Cole and Kazem Al-Saher). Khuri graduated Magna Cum Laude with departmental honors from UCLA with a Bachelor's in Economics and Music Performance, and obtained his Master's degree in Music from Temple University.  He received his PhD in Ethnomusicology from the University of Pennsylvania in 2018. 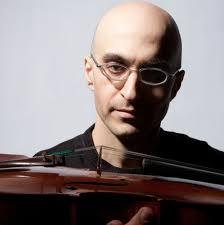